The best books for Entrepreneurs​ 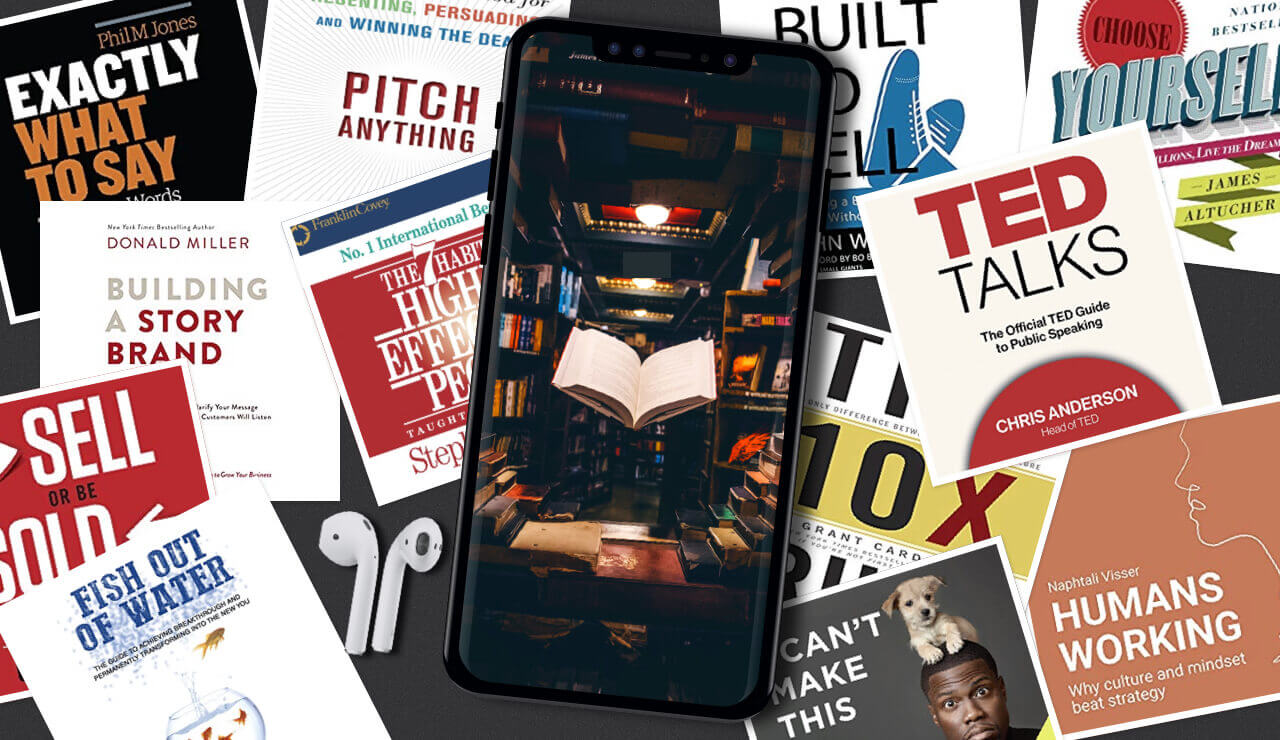 In 2016 I discovered Audible, and this totally changed my life.

I believe that in this day and age, when we have access to the world’s most brilliant minds in our smartphones, it’s almost crime not to listen to them.

These minds are all accessible through audiobooks.

“Our success follows our level of personal growth. Not the other way around”
– Hal Elrod, The Miracle Morning

I’m happy to share with your this list of the most influential books that I’ve read over the past couple of years.

Books that I think are important for any entrepreneur looking for personal growth in all aspects of his/her life.

Most of these links are in Audible format, because that’s how I like to consume my books, but you can easily find the hardcover there in Amazon if you’d like.

I tried to segment them based on their influence on me… so it’s personal but honest segmentation that you might find valuable.

Before you begin, be sure to:

The 10X Rule, Grant Cardone
This is THE BEST BOOK I’ve read and it totally shifted my mind on success and on my commitment to my success. It holds principles like “Massive Action” and “Commit First Carry out Later” and many more and really breaks down so many important things that we need to learn and re-wire our brain accordingly.. This book is IMO the best business book I’ve ever read.

Building a StoryBrand, Donald Miller
SHORT. SIMPLE. PERFECT! This is a great book! Just read it and you won’t regret it.

The Secret to Success, Eric Thomas

Fish Out of Water, Calvin Wayman

How to Get and Stay Motivated, Grant Cardone

Sell or Be Sold: How to Get Your Way in Business and in Life, Grant Cardone

You Are a Badass at Making Money, Jen Sincero
OR
Secrets of the Millionaire Mind, Harv Eker

Own the Day, Own Your Life, Aubrey Marcus

The Five Love Languages: The Secret to Love That Lasts
What’s an entrepreneur without a healthy relationship with his/her spouse? 🙂

Do You Talk Funny?, David Nihill

I Can’t Make This Up, Kevin Hart
FUNNY AS HELL!! And a great story!

Extreme Ownership, Jocko Willink, Leif Babin
Maybe it’s because I’ve been to the army, but I really connected to their stories and love the connection between military and entrepreneurship. I can see how this plays a role in my life.

Be Obsessed or Be Average, Grant Cardone

The Thank You Economy, Gary Vaynerchuk

12 Rules for Life, Jordan B. Peterson

How to Write a Book, David Kadavy

I Will Teach You to Be Rich, Ramit Sethi

The Obstacle Is the Way, Ryan Holiday

The ONE Thing, Gary Keller, Jay Papasan
I Call bullshit on the glorification of the “ONE THING”. As much as I agree with the notion that you need to focus and have priorities – and this book has some real gems in it – I think that the concept of this book has caused more damage than good for most millennial entrepreneurs. “I want it all – and I can have it all!” should be our calling.

The Art of Work, Jeff Goins

Purchased, but Haven’t listened to them yet:

The Tibetan Book of Living and Dying, Sogyal Rinpoche

The Power of Consistency, Weldon Long

Love Yourself Like Your Life Depends On It, Kamal Ravikant

The Greatest Salesman in the World, Og Mandino

As a Man Thinketh, James Allen

The Book of Joy, Dalai Lama

Check out the Channel
Menu